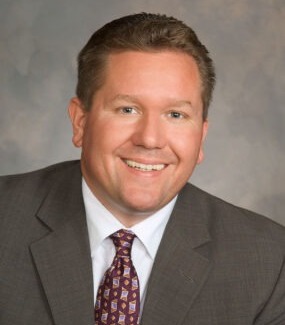 A fifth generation Sacramentan, Trey Bonetti comes from a family with strong roots. Trey’s grandfather, Frederick James Bonetti, owned the venerable Sacramento Rubber Company, and he was also a two- term member of the Sacramento County Board of Supervisors.

Trey grew up in the Sacramento City School system, and graduated from McClatchy High School. He went on to get his degree in Broadcast Communication Arts from San Francisco State University.

Prior to joining Cook Realty, Trey was a Reporter and Producer for News Radio KFBK. He also spent time at KCRA Channel 3 in the Newsroom and on Production for new programming such as TV Lite.

Upon joining Cook Realty, Trey managed the Property Management Company and became a licensed Realtor in 1989.

In 2002, Trey became the Managing Broker of Cook Realty. Trey says, “I look forward to carrying on the Cook family tradition of making the real estate process as easy as possible for our clients.” And so he has, for under his direction Cook Realty has continued to grow, prosper, and maintain a strong community presence.

As a Realtor, Trey is one of Cook Realty’s top Sales Associates, in addition to being the Primary Broker. He has been recognized by the Sacramento Association of Realtor’s as a Master’s Club Outstanding Life Member.

Trey is an active member of the Land Park Lions Club and President of the Cook Realty Charitable Foundation, Inc. Trey and his wife Luz are devoted to their two daughters, and they are committed to the betterment of the community they live in.